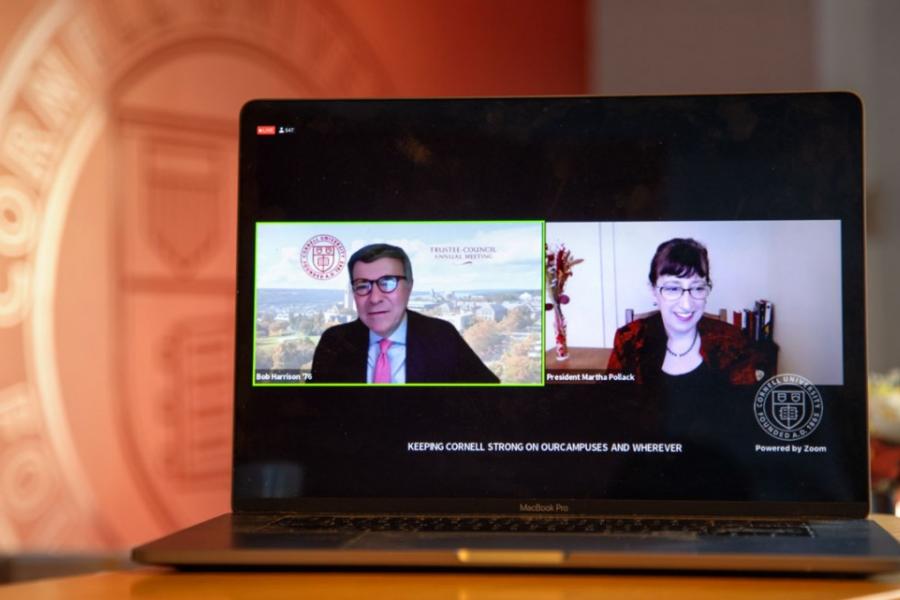 As part of that future, she also announced that two of the under-construction North Campus Residential Expansion halls will be named for two esteemed alumnae – U.S. Supreme Court Justice Ruth Bader Ginsburg ’54, who died Sept. 18, and Nobel Prize-winning author Toni Morrison, M.A. ’55, who died in August 2019.

Pollack began her address, part of the university’s Trustee-Council Annual Meeting and streamed live online, by reminding Cornellians of the university’s mission, which is “to discover, preserve and disseminate knowledge, to educate the next generation of global citizens, and to promote a culture of broad inquiry throughout and beyond the Cornell community.”

The stresses of the pandemic have highlighted the essential nature of Cornell’s mission, she noted, shining a spotlight on the values of knowledge and truth, the ability to communicate across difference, and of course the exceptional education and research that are Cornell hallmarks.

The COVID-19 pandemic in particular, she said, has reminded us all that society depends on expertise – from public health and vaccine development to supply chains, communication, technology and new ways to teach.

“And of course, we also need the art, the music and literature that are helping all of us survive and understand the strange times in which we’re living – one might say that we need both ‘any person’ and ‘any study,’” she said, echoing Ezra Cornell’s famous founding principles.

Pollack recounted the difficult decision made in March to deactivate Cornell’s campuses while still finding ways to continue the university’s teaching and research mission. University leaders embraced the principles of relying on science for any reopening plan, and she explained the detailed research and epidemiological modeling that found that the safest way forward this fall, for both the Cornell and surrounding Ithaca communities, was to bring students back to campus rather than conducting the semester entirely online.

Cornell was able to plan and enact an ambitious testing, isolation and contact tracing plan key to being able to operate an in-person semester, largely due to the huge effort made to create the Cornell Coronavirus Testing Laboratory (CCTL), housed in the College of Veterinary Medicine’s Animal Health Diagnostic Center.

Designed and implemented in collaboration with local health departments and officials, the CCTL, using a pooled testing approach, can process nearly 50,000 samples per week with an under-24-hour turnaround time. This has allowed for regular, extensive surveillance testing, Pollack said, as well as adaptive testing (going beyond the formal contacts of a known positive) to ensure that any positives are caught early. And this hasn’t drawn down local resources, she noted; in fact, last week, Cornell donated $160,000 worth of its testing capacity to help the Ithaca City School District test more than 1,200 students as it prepared to reopen Oct. 5 for in-person instruction.

She noted that, to date, almost 165,000 samples have been tested since the start of classes on Sept. 2, and in that period, only 101 have been positive – and only 10 of those were in the past two weeks.

“We are seeing remarkably low testing positivity rates,” she said, “and remarkably low overall rates of infection.” The numbers are “significantly lower” than the epidemiological model had predicted, even when run with the most optimistic parameters. That is due to Cornell’s students, Pollack said, “who have tackled this semester as true Cornellians: taking pride in doing what many people said couldn’t be done, and in showing the world that, even without football or hockey, Cornell can still beat Harvard.”

Pollack also thanked the many units and staff volunteers who helped safely bring students back to residence halls as the semester began – a move-in process that took 10 days, 12,099 bed nights in area hotels, 1,349 shuttle bus rides and 30,000 quarantine meals.

She noted the new normal of socially distanced classrooms (about 30% of classes have an in-person component while the rest are being taught virtually), dining halls and study spaces. In New York City, Weill Cornell Medicine has full enrollment, and there has been “enormous interest” in the new Urban Tech Hub at Cornell Tech, she said.

Pollack added that the university’s success is fragile, and everyone must remain vigilant.

She also described the financial challenges that have accompanied the pandemic, from the enormous costs of transforming the campus to the lost income from enterprise units, tuition and more. But those costs are small compared to the increased costs of the university’s commitment to meeting the full financial needs of its undergraduates – an additional $90 million in financial need related to the pandemic just this year, she noted.

Some measures – like hiring and pay freezes, and spending cuts – have helped balance the budget, as has generous support from many Cornellians, she said, including the Cornell Promise initiative for student financial aid, which has now received gifts totaling $26 million.

Pollack described continued efforts and successes in the university’s four priorities of academic distinction, educational verve, civic responsibility and One Cornell, including:

Pollack said she was delighted to announce the naming of two residence halls for Ginsburg and Morrison as part of the North Campus Residential Expansion (NCRE), which is expected to open partially by fall 2021 and fully by fall 2022.

“For both of these extraordinary Cornellians, we wanted to create a memorial that would be seen by, and have its doors open to, ‘any person’ at Cornell,” Pollack said, “reminding all of our Cornell students, not just those in a particular field or college, that their path from Cornell can take them anywhere.”

The opening of the halls, as well as the entire NCRE, will mark the beginning of a new chapter in residential life at Cornell, Pollack said, “one that will be focused on building community and supporting communication across difference – revitalizing, and in many ways reinventing, the student experience here.”

“In years to come, every Cornell freshman and sophomore will live on campus, starting their time here on North Campus – and every one of them will see, on that campus, the names of two of our most accomplished alumnae.”

Pollack also announced the creation of the Ruth Bader and Martin D. Ginsburg Program, established by Jeff ’79 and Christie Weiss and supported by several other donors. It will be used to create a new program at Cornell honoring the interests of the justice and her husband, Martin ’53, who died in 2010.